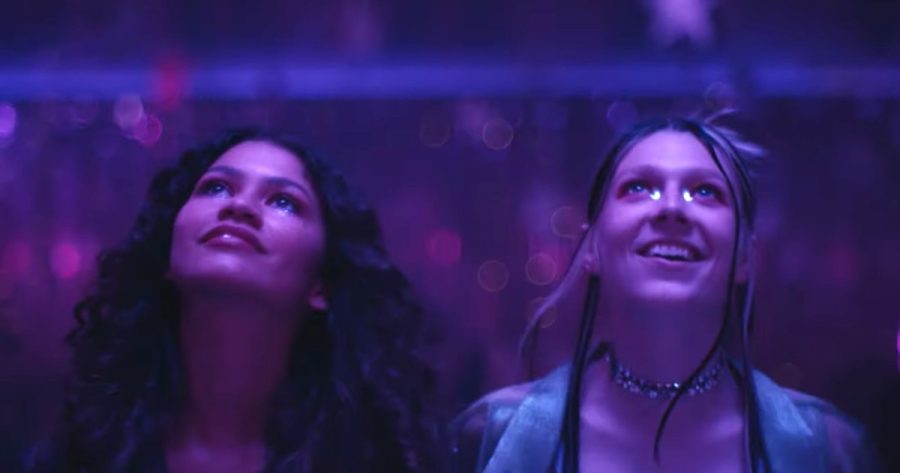 Euphoria, a drama on HBO Max, depicts the coming-of-age process, of the main character Rue, a
recovering drug addict, played by Zendaya. The show focuses on darker themes including- sex, drugs,
relationships, identity, and trauma. Euphoria lighting and color palates were unique, capturing the
emotional realism and abstract sentients of the characters. When directors and film producers use certain
colors in a film to impose an emotion and undertone to the viewer, they utilize film color theory. Film
creators use different variations of hue, saturation, value, color psychology, and color concepts to create
different palettes. Cinematographers and Directors take advantage of color palates to associate
characters and settings with a certain connotation and emotional traits.

Each character had a unique color profile fitting their personality and aesthetic. Heida Biven, the
costume designer behind Euphoria, exclaimed, “Each character had their own color story, that was
a way that I could really differentiate.” For example, to reflect traditional femininity, Cassie was
dressed in blues and pinks representing her desire to want to fit the beauty standard to feel
loved. In Cat’s wardrobe, there was a strong presence of black and red; these colors symbolize
her boldness that develops as she gains confidence, while growing more dominate and and
harsh. Later through the series, she starts to wear a green palate, showing growth and calm
with her relationship with Ethan. Jules wears pastels, including light pinks and baby blues
depicting her pursuit of femininity as a transgender woman. A strong presence of purple is used
throughout Maddy’s wardrobe. The color purple is correlated with royalty and confidence,
which is present throughout Maddy’s character development.

In the overall film process, analogous and complementary colors were used as well as unique
camera angles to create Euphoria’s distinctive atmosphere. To portray a mood of depth, intuition,
universal flow, and imagination the scenes mixed similar colors (analogous) of purples and blues to
create the mood. Additionally, in day versus nighttime scenes the creators contrasted complementary
colors. The bright blue of a daytime sky contrasted with the warmth of the sun (yellows and oranges
opposite on the color wheel of bright blue). While the black and dark blue sky contrasted with the soft
yellow moon and streetlights at night. Also, to create the aromas of parties, carnivals, and other scenes,
a variation of lighting including, “old school tungsten lights” , “asylum” bright LEDS, and neon flashing
party luminance were set alight.

Euphoria has gained popularity because of the use of darker themes, while keeping the original
traits of a television drama; although, what makes Euphoria unique is its use of lighting and color. The
costume designer, cinematographers, and director use color theory to inflict certain emotions and
themes in the characters and settings.