Spiderman: No Way Home a Smashing Hit in Theaters 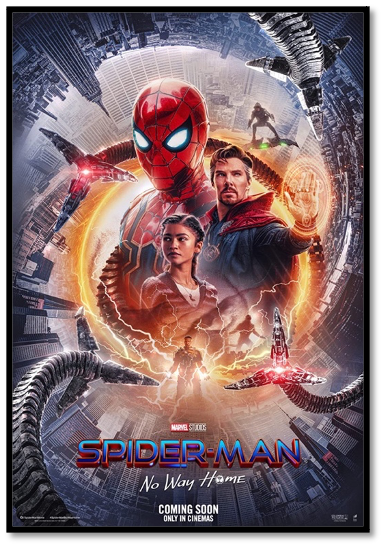 Movie cover for the movie

Spiderman: No Way Home, Directed by Jon Watts, was one of the most highly
anticipated movies to be released in 2021, hit theaters internationally on December 17th and was
a smashing success to audiences everywhere. Leaving many watchers on the edge of their seats,
the film received a high rating of 98% on Rotten Tomatoes and has acquired over 1.6 billion
dollars from revenue worldwide.
After months of rumors about the plot of the film, there were high expectations that were
set for the movie. The film made the eighth highest grossing movie worldwide, practically
shattering the anticipation of the movie industry and audiences. Not to mention, the movie did
very well for being released during a global pandemic. Despite theatres having its doors closed
during 2020, viewers did not hesitate to flock to the nearest showing of Spiderman: No Way
Home. It has also gathered many positive reviews from movie-critics who praised the action-
packed story line, emotional plot, exceptional cinematography, talent, and apparent chemistry of
the cast. The film featured: Tom Holland as Spiderman/ Peter Parker, Zendaya as MJ, previous
Spiderman’s Andrew Garfield and Tobey Macguire, and the rest of the cast encouraged many

fans to hit the theaters on opening weekend. The unification of the three spidermen and the play
on the multiverse allowed people of all ages to enjoy it. Even those who have not watched the
previous two of the trilogy series should be encouraged to watch because of the plethora of good
responses. To those who do not know the basic gist of Spiderman: No Way Home here is a brief
summary:
It is the third movie to the previous two sequels Spiderman: Homecoming and
Spiderman: Far from Home. In the film, Peter Parker, a normal teenage boy must face the
consequences of his revealed identity as Spider-Man to the world. Noticing the news was going
to not only change his life forever, but affect his family and friends as well, he desperately asks
Doctor Strange to perform a spell so everyone will forget his identity. Unfortunately, the spell
goes horribly wrong and shatters the multiverse. Monstrous villains invade leaving Peter Parker
and his sidekicks to fight off the evil.
We don’t want to give any more spoilers so if you are curious to find out more about
what the film has in store, head to the theaters as soon as you can. Luckily for you, it’s not too
late. Spiderman: No Way Home is still playing in many theaters in our area. If seeing Tom
Holland in action could not convince you, maybe Tobey Macguire and Andrew Garfield might.
Plus, who would turn down seeing not one, but three spidermen working in unison to save the
world from potential destruction? Believe me, it doesn’t get any better than that. This tear jerking
and action-packed hit is definitely one you will not want to miss.
Another thing to keep in mind, it is recommended to not only watch the spiderman
movies starring Tom Holland, but to also watch the Tobey Macguire and Andrew Garfield
versions as well if you are wanting to fully understand this cinematic masterpiece. However
viewing the movie without previous knowledge is totally fine as well.